(Condensed from the original.)

In 1983, a group of apartment buildings was completed in Taipei City, Taiwan. Construction used recycled steel contaminated with radioactive cobalt-60.

These buildings were occupied by some 10,000 people with estimated radiation doses of 40 millisieverts per year, mSv/y.  (Americans receive about 3.3 mSv/year in natural background radiation.)  The results in the graph show cancer mortality for these apartment dwellers compared with the general population in Taiwan. 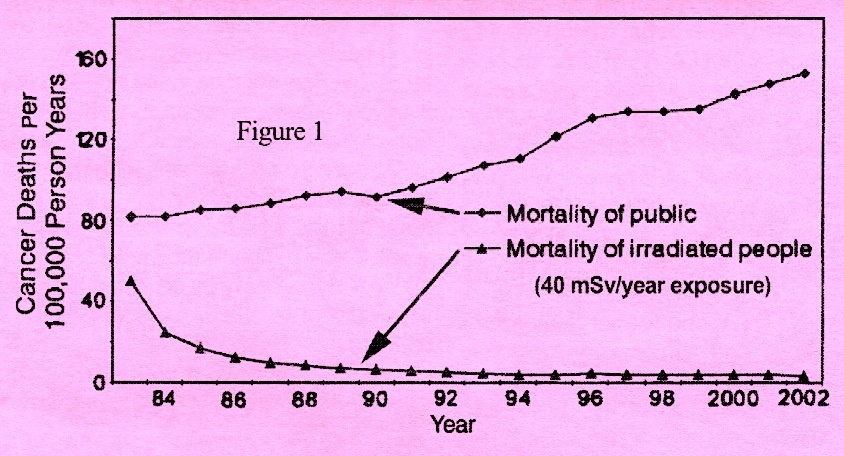 These results were published as “Is Chronic Radiation an Effective Prophylaxis Against Cancer?” in the Journal of American Physicians and Surgeons 9, No. 1, Spring 2004, pp 6-10.

Based on the best experiment to date, human cancer deaths can be reduced 20- to 30-fold by increasing whole-body radiation.  Cobalt-60 is a good choice, since its half-life of 5.3 years is long enough to be useful, yet short enough to conveniently remove it with time. It could be utilized in bedrooms, for example, providing good control over the dose.

There is nothing in the realm of cancer prevention that has ever shown a potential benefit remotely comparable to ionizing radiation. Chemical hormesis and diet restriction, about which much less is known, will probably turn out to be the closest rivals.